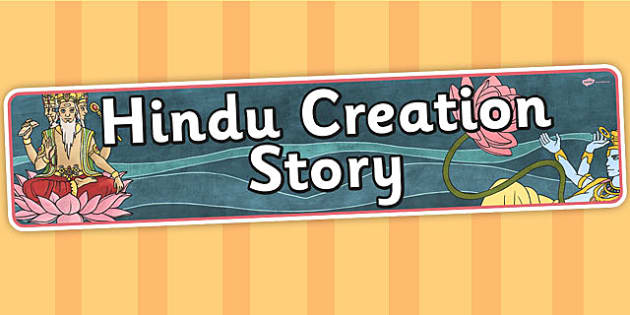 On the seventh day, God rested. Adam and Eve were expelled from the Garden of Eden. Norman Brown interprets the Rig Veda to come up with various underlying creation stories. Here is the one most like the preceding myths. Before the divine pair of Earth and Sky, who created the gods, was another god, Tvastr, the "first fashioner". He created Earth and Sky, as a dwelling place, and many other things. Tvastr was a universal impregnator who made other things reproduce. Brown says that although Tvastr was the first dynamic force, before him were the inanimate, inactive Cosmic Waters.

Norman Brown. Journal of the American Oriental Society , Vol. The Chinese creation story comes from the end of the 3 Kingdoms period. Heaven and Earth were in a state of chaos or cosmic egg for 18, years. When it broke apart, the high and clear formed Heaven, the dark formed Earth, and P'an-ku "coiled-up antiquity" stood in the middle supporting and stabilizing. P'an-ku kept growing for another 18, years during which time Heaven also grew.

Apsu wished to kill them, but Tiamat, who wished them no harm, prevailed. Apsu was killed, so Tiamat sought revenge. Marduk killed Tiamat and divided her, using part for earth and part for the heavens. Mankind was made out of Tiamat's second husband. There are various Egyptian creation stories and they changed over time. One version is based on the Ogdoad of Hermopolis, another on the Heliopolitan Ennead, and another on the Memphite theology. The gander was identified with Geb, the earth god. Folklore , Vol. In the beginning, truth or goodness fought lies or evil until lies was worn out. The whole point is that the new testament rests on the shoulders of the old testament. Anti-Semitism could be averted if this relationship were driven home.