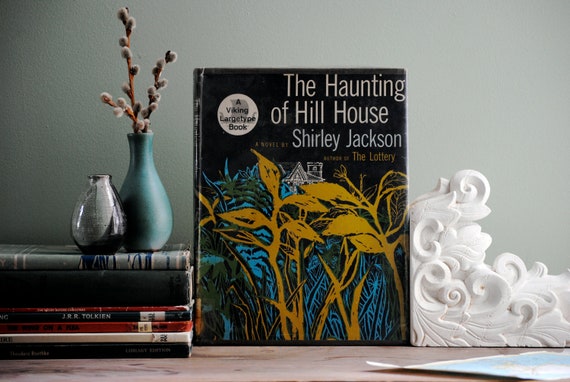 If the universe is a great mind, it may sometimes have its absences. Maureen Harrison pipes up from the back: 'This cake we're having, could we have it iced? But Beltway is probably more accurate, around here anyway, a tight-pulled band trying hopelessly to contain the bulges within. I was just rereading it the other day. It is one of the most amazing first sentences in my humble opinion in modern literature. I read it over and over again.

BTW, since we have been discussing here and on The Slacktiverse about reading genre fiction, do you think that some people approach The Haunting of Hill House as a genre work and therefore misread it? I think that that sentence does a masterful job of resituating audience expectations. The negative reviews complain that it's not 'scary' enough, or that 'nothing happened'. Which suggests they were looking for a female Steven King he is, I believe, an admirer of Jackson , couldn't perceive the tensions that happened between the characters because they weren't spelled out enough for them, and got, in some cases, very angry that the book wasn't what they expected. From a genre perspective, the book is practically non-existent. There are very few thrills and spills, and most of what happens takes place in small human frictions.

The genre readers seemed to feel cheated. The first sentence didn't seem to change it for them; while I'd love to believe it was true, sadly I think it takes a lot more than a sentence to undo years of expectation and habit-cultivation. But yes, I think that people looking for a genre book are pretty much baffled by The Haunting of Hill House. Both are authors who tend to make a horror show of big egos in a small space. I arrived at the book knowing nothing about it but having been blown away by the film.

Then I read the book and just But the fear it induces is, let us say, existential in character. And as a word smith. I kid you not I keep my copy by the desk and pull it out and reread it every once in a while just to glory in the writing. Vis a vis King -- I think that some of the trajectory of his writing demonstrates one of the perils of his and many people's approaches to "fear" and that is that they have to up the gore and horror constantly because their audience responds to it much like a junkie does to a needed drug. Every time the dose needs to be larger and larger. The Secret History is so compelling it's almost a guilty pleasure to read, but it's actually beautifully written, erudite and really smart.

The Little Friend isn't quite such a glued-to-the-page read, but it's great too; I found it was a book that I fell in love with on a second reading. Totally recommended. She's one of my favourite writers. She includes some fairly sharp parody in The Secret History of a university environment as well, which might amuse you if you aren't especially devoted to Semiotics Personally I'd hesitate to assume that King's upping the gore I'll have to take your word on that as I've only read a handful of his books is based on audience response. It might be - probably some authors react to their audiences more than others - but it might also be for reasons of his own that don't have to do with his audience.

Out of interest, can you describe the trajectory of his writing? I dislike trying to "peer inside" the lives of authors since I and most people who do that are usually wrong. He has written at some length about this -- apparently he doesn't even remember writing some of his most famous works. And then he became terrified that if he stopped writing or if he stopped using he would never write again. King also says that he started writing as a child when he believed that if you write a fear down it wouldn't come true. He had a fairly fraught childhood one parent abandoned the family living in a part of the US that gave birth to Lovecraft -- it is scary country -- and grew up being babysat by horror and sci-fi films.

So much of his middle career was by his own admission him living in a drugged out state and writing his fears out in his books. In fact you can see as his fears moved from one stage of his life to another he used to teach -- see fears of out of control school children. He had children -- see Pet Sematary sic. The Shining was to a degree autobiographical. Anyway, early on he didn't have a lot of time, was writing while holding down other jobs and wrote fairly short novels that were based on the type of fear that one easily feels walking the backwoods and backroads of his home state.

Then his work is dominated by books in which characters often writers are damaged by their own inability to control their desires The Tommyknockers for example. You start to see glimpses of his private struggles Insomnia for example. At the same time he became interested in developing a "created universe" so that the 'salem's lot is just down the road from another town in which he tells a story and finally he tries to pull The Stand into the world of Insomnia and The Dark Tower series and it all starts to collapse under its own weight.

It becomes portentous. And his fears about forgetting how to write infect his own ability to harness his own writing. I wouldn't go so far as to say that King's "issues" leak out in his writing because King has long consciously used his writing in order to deal with his issues. However, he has, from his early writing, had trouble as a "closer" of stories. He builds up the biggest of big bads and then it is almost impossible to deliver on the horror that is implied throughout the book.

For me, as a woman, that is compounded by his particular "issues" with women and sexuality. So, he started using stories to purge him of his fears. Then he found no matter how many fears he purged himself of there were still more when he closed his eyes and was alone in his own mind. So he upped the ante in his stories but his subconscious just kept on creating more fears to respond to because without those fears -- he faces his ultimate fear -- which is that he will no longer be able to write. Does any of that make sense. I've certainly noticed that King's books tend to end with, basically, a punch-up, which is something I didn't find satisfying. I've noticed as well that he'll sometimes throw scares into the mix that don't seem strictly necessary - Gerald's Game , for instance, is all about being tied to a bed on your own, unable to escape, but he has a scary madman wander into it because It feels like a lack of conviction about the central conceit, which to my mind is plenty horrifying on its own.

Though a massive challenge: writing a whole book about someone who can't move and has no one to interact with is something I'd never dare take on, so if it was a failure of nerve, I heartily sympathise. It's funny. From everything I've heard, King seems to be a very nice guy in real life - a guy who's had problems, yes, but a decent sort. But the voice of his books is often angry and mean, and I find it hard to like.

Of course, every writer probably has a different 'self' in their books from their lives my husband finds my books almost too upsetting to read, for instance , but it's an interesting thing. King reads like a writer who's not in control of his voice - which I think he himself has said. Something I find more interesting to read as a writer than a reader, if that makes sense. And the reader screams in terror presumably metaphorically. And then, a minute or two later, the reader thinks, "Well, hey. A ten-foot-high bug isn't that bad. At least it wasn't a foot-high bug. He also commented on the relationship between fear and disgust and said, in so many words, that if he couldn't get a shiver out of his readers, he wasn't too proud to go for the good old-fashioned gross-out.

I am not particularly a fan of King's writing, but I enjoyed those essays, probably more than anything else of his I've read. On the other hand, a cousin of mine, a fairly hard-bitten cop, who is a fan of his work, says that you spend most of the book saying to yourself, "Aw, that's not so scary. I have gained quite a bit of admiration for him as a person, as the result of an interview from some years back, after he had a life-threatening accident. He was hit by a guy who had multiple driving infractions and was driving in a patently unsafe fashion. He made a couple of points, in response to the normal interview questions about how the accident has affected his life, did he maintain a grudge against the guy, and so on.

King pointed out that yes, had he been a foot to his right, he wouldn't have been hit. However, had he been a foot to his left, he would have been killed, so he's not complaining. He also pointed out that, yes, he had years of physical therapy and is left with some permanent disabilities. On the other hand, he can still do what he loves doing writing , and he is by any measure still luckier than most people who have ever lived.

I liked that way of looking at things. What sticks out most in the book is how the four characters, who are complete strangers, establish an easy camaraderie, almost like they are a tight-knit family. The author puts more focus on the women protagonists — Eleanor and Theodora, who become friends from the moment they lay eyes on each other, like long lost sisters. Just as quickly as the two become friends, they quickly develop a rather acrimonious bond too, spiting each other in subtle ways. The limited number of characters gives Jackson enough scope to sketch each of their personalities in vivid brush-strokes. Towards the end of the novel, two new characters make their entrance, Mrs Montague and her friend Arthur.

They offer an interesting contrast to the already existing roster of guests in the mansion. While Mr Montague believes in taking a more scientific approach to the supernatural, his wife believes in spirit-boards and seances. We have to draw our own conclusions about the end. Also, some things are left completely unexplained — like why the Dudleys take care of the house, despite their evident fear of the property and adamant refusal to stay on the grounds once the sun sets.